The Westmount Independent’s sales representative, Arleen Candiotti, took some time off work this October to go to Israel to volunteer with Sar-El Canada, a non-profit group that organizes foreign supporters of Israel to help the Israeli army. According to its website, the program is open to people 17 and older who are “eligible for Israeli citizenship under the Law of Return” and “other supporters of Israel,” although Candiotti acknowledges that all but one in her 27-person group were Jewish. Participants pay their way there and for any trips on weekends, or before or after their volunteering period. “The idea is to have volunteers do chores so soldiers can concentrate on other things,” said Candiotti. On Candiotti’s trip, it was older Canadians and Americans, plus one each from Australia, Germany and Holland, who had the time to volunteer. Several participants were in their 80s and 90s. Many volunteers return annually, the longest streak being 40 years in a row. There was one supervising employee for their work and two army supervisors. On Day One of her two-week stint, she was taken to a base near the Tel Hashomer Hospital in Ramat Gan and shown the work that her 4-person unit would be doing: disassembling the backpacks of army doctors, removing expired supplies and re-assembling them with fresh ones. “We had medical supplies for every part of the body and all types of operations: from eye operations to tracheotomies, and syringes to sutures. You name it. While assembling the kits, I thought, ‘Hopefully, no young solider will need this.’” 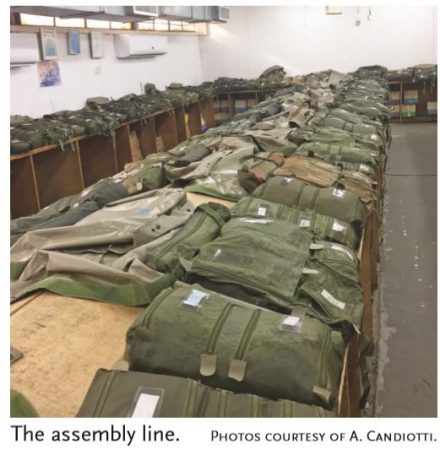 After disassembling the old kits, volunteers would walk through a carefully laidout pick-up line taking the prescribed number of items for one new kit. Once many kits were ready, they would be pack ed. “Five days a week, we worked from 8 am until noon, and from 1 pm to 4 pm, except when we did overtime.” All told, the group assembled 271 kits in two weeks. Candiotti was moved in many ways. “Each day’s ‘flagpole,’ or raising of the flag and singing of the anthem, was an important event,” she recalled. “It was very emotional, and it grounded you as to who you are and why you were there. It’s like the Canadian flag and wearing poppies in November. It reminds us of war and how fortunate we are.” “I loved the overall experience so much. I just can’t get over, how amazing Israel is. Doing that work made me feel good. It’s easy to write a cheque, but this felt like I was truly helping.” But it was not all good times. Candiotti described the food as “minimal.” “‘Oh, boy,’ I thought when I saw my first meal. ‘And it’s 30°C. I am going to lose weight.’” (Which she did.) When she was asked to pick her uniform
out of a box of loose, unfolded clothing, “I was flabbergasted. I did not think that was what they meant by ‘providing a uniform.’” Participants also had clean-up duties like regular soldiers, including mopping floors and cleaning toilets. A solemn, emotional moment of the trip was a visit with the group to the National Remembrance Hall in Jerusalem, unveiled last year. At the site, there are memorial stones for the 23,000 soldiers who have died in defence of Israel , which are lit up on their yahrzeit or anniversary of their death. “Every person’s life has meaning and no soldier dies without being remembered – forever,” she said. Arleen Candiotti with one of the medical backpacks.
The assembly line.

Photos courtesy of A. Candiotti. Reprinted with permission from the Westmount Independent.