When volunteering for Sar El, my wife and I once were working at a base not far from Kibbutz Sde Boker, where Prime Minister David Ben-Gurion had a second home.  He loved the Negev and believed that the future of the State of Israel depended upon populating the Negev.  On an afternoon excursion, our volunteer group had the opportunity to visit Sde Boker.  With that, another opportunity opened for me – to honour both my Uncle Yakov and David Ben-Gurion.

Uncle Yakov was a pioneer (Halutz) having come to Palestine from Germany as a young man in the late 1920’s.  He had been a member of the Blau-Weis (Blue-White) and later the He-Halutz (Pioneer) youth movements, both Zionist organizations. The latter prepared Jewish youth for making Aliyah (immigrating) to Palestine.  Prior to emigrating to Palestine Uncle Yakov was sponsored by He-Halutz in studying cheese making in Germany and Switzerland.  He spent his life working for dairies in Palestine/Israel managing the manufacture of many different cheeses.  He was sent by the Jewish Agency to Holland to purchase the first automated milking machine for Palestine.

He never ran for political office but was a member of Ben-Gurion’s Labour party.  He often wrote background material for politicians to use in their speeches, and he admired Ben-Gurion greatly. He also admired one of Ben-Gurion’s protégés, Teddy Kollek, who was mayor of Jerusalem for almost thirty years.

When Uncle Yakov retired, he moved into a seniors home in Tel Aviv which had a very small pottery studio with a small kiln.  He had done some painting before he retired, but he had always wanted to be a sculptor. He especially desired to sculpt a life size bust of Ben-Gurion and give it as a present to Teddy Kollek.  However, the kiln in the studio was too small for a full size bust, so he created the sculpture in two sections, which fit together. 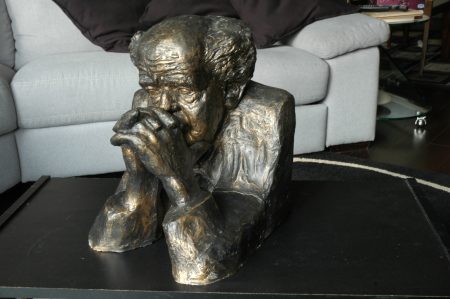 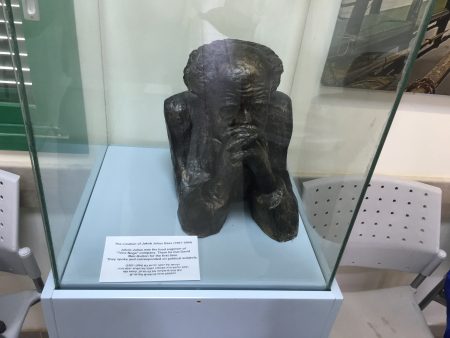 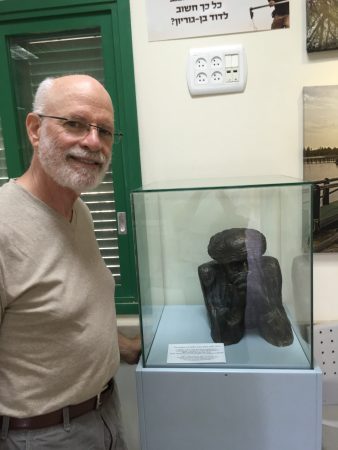 On the Sar El excursion to Sde Boker we visited Ben-Gurion’s house, where I saw a copy of the photograph that my uncle had used in creating his sculpture of Ben-Gurion.  I told the docent who was leading our group about my Uncle Yakov and the bust of Ben-Gurion. I suggested that the bust might be better located in the museum at Sde Boker than in my house. I asked whether she thought that Kibbutz Sde Boker would like to have the sculpture.  The following year when my wife and I came to volunteer with Sar El, we first delivered the bust of Ben-Gurion to the museum in Sde Boker.  Now it sits on a pedestal in an acrylic case in the lecture room of the museum with a brief written description of the pioneer cheese maker, who became a sculptor when he was in his seventies. After wandering without a home and living in the Diaspora for many years, my uncle’s “David Ben-Gurion” sculpture is permanently back where I think it always was meant to be – in Ben-Gurion’s kibbutz in the Negev in the State of Israel.