Somewhere in Tel Aviv we met. She heard me speak Dutch and spoke to me. Her story is one with a golden edge.

80-year-old Ada van Oijen is in Israel to do volunteer work at Sar-El. Sar-El (Hebrew: שר-אל, from: Sheirut Le’Yisrael = service for Israel) is a volunteer project of the Israeli army. The volunteers are there to support and mainly work in logistics, maintenance, catering, provisioning and medical services.

“I was a professional soldier in the Dutch army and always worked for the Air Force. I once read “I sleep with my gun,” written by Israeli Yael Dayan. It is about a Jewish girl who joins the Israeli army, a beautiful story. That book touched me deeply, so I decided to enter the Dutch army when I was nineteen. In 1990 I first heard about Sar-El. Its founder came to my hometown of Vlissingen to talk about it. It appealed to me immediately and I signed up. You pay for the flight yourself, accommodation is provided.
My love for Israel and the Jewish people is deep. When I was five or six years old, my father told me about the Second World War. It has always stayed with me. So many innocent people who were killed. I could never get rid of that again.
It may sound strange, but I feel Jewish at heart and it will always be that way. I am right behind Israel, whatever happens.

Thirty-six years and seven months I served in the Dutch army. In 1994 my commander thought it was so fantastic that I always gave up my days off to work for the Israeli army that he nominated me for a royal honor. And on 29 April 1994, I received it in the presence of the troops at Woensdrecht Air Base. I was as proud as a peacock.

I have been coming to Israel since 1964. During the six-day war in 1967, I cried like a little child, I thought I would never see my Israeli friends again. Day and night I was glued to the radio, I did not sleep. On my car I had a sticker with the text: I am behind Israel. My friends said I was crazy, they were afraid that my car would be destroyed. I didn’t care and nothing ever happened. This year is the 29th time I have worked as a volunteer for Sar-El. I always join a group from Canada, now we know each other well. I hope I can continue this for many years. ” 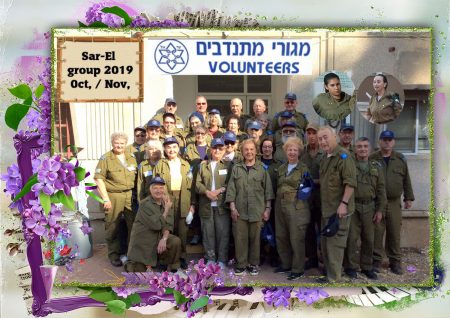